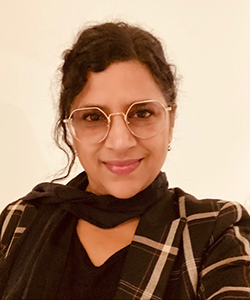 Pratima Rao is Deputy Director for the Trade Commissioner Service at the Toronto Regional Office of Global Affairs Canada (GAC).  She has been a foreign service officer with GAC for over 25 years and has worked in both the political and trade sides of the department. As a Canadian diplomat, she has served at the Permanent Mission of Canada to the United Nations in New York, the Canadian Consulate General in New York, the Canadian Embassy in Washington, DC and most recently, as Senior Trade Commissioner at the Embassy of Canada to Sweden. Between postings abroad, she has worked at GAC in Ottawa in the policy planning bureau, the legal affairs bureau, and in Toronto as a Trade Commissioner. She has a BA (Economics) and an LLB from the University of Alberta and is co-editor of the book, Borrowed Power: Essays on Cultural Appropriation (1996, Rutgers University Press).